My Breastfeeding Story: Tender Nipples, Latch and the Early Days 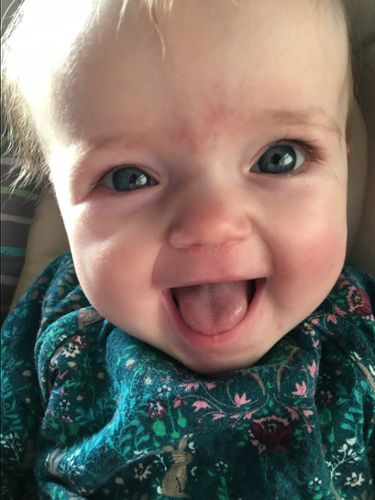 "I’d like to say that when I was pregnant I was one of these determined ‘I’m going to breastfeed no matter what’ mums but I really wasn’t. I said that I would do it if I could and didn’t think much else about it.

And then on the 20th June my baby girl, Eleanor was born. They asked me during my labour if I was wanting to breastfeed and answering yes, they encouraged her to latch on to the breast within the first hour of her life to which she did on to my left breast with no issue. As soon as I felt and saw her feeding from me my whole mind-set towards it changed and I knew it was what I wanted to do.

But then the nipple pain started....and she wouldn’t feed from my right breast at all. She latched perfectly, but then nothing, no sucking, no movement, nothing. This resulted in constant feeding from my left breast and the pain in my left nipple worsening and worsening. Eventually after a lot of fiddling around and what felt like constantly poking and prodding from the midwives, she began feeding from my right breast but the pain in that nipple started to match the pain in my left. All the midwives were telling me the latch was perfect so why was I getting the nipple pain?! I remember on numerous occasions dreading the next feed, knowing it was going to be so painful but at the same time knowing I was providing Eleanor with what she needed and wanting to carry on.

"I had to keep reminding myself that we were both new to this."

On getting back home I began messaging just about every person I knew who breastfed asking if they had experienced the same pain (and blistering and bleeding) as me (to which most had). I wanted to know it was going to get better. One of my friends recommended a lovely lady from NCT for me to contact, who visited within 2 days and supported me in getting a better latch. Quite a few days (and YouTube videos) later it started to feel more comfortable. I had to keep reminding myself that we were both new to this. It wasn’t always going to be like this and soon I would be getting my boob out effortlessly and painlessly.

About 2 to 3 weeks later we really got in to the swing of things and breastfeeding became virtually painless. There were the odd few days here and there where the latch wasn’t right and the pain came back however these soon became few and far between.

I would advise any new mum who is wanting to breastfeed, who come across any problems, to focus on it getting better and try and seek lactation support as soon as possible. Speaking to other mums helped me so much to see the light at the end of tunnel!

I had completely underestimated the power of the boob in almost all situations. As well as a source of milk, it has been a source of comfort, been pain relief and helped her go to sleep! Eleanor is now nearly 6 months old and I can’t see myself stopping any time soon!"

Thank you to mum, Anne, for sharing her breastfeeding experience. If you would like to share your breastfeeding story please email medelamums@gmail.com

Next: Mothers Milk: The Benefits