This week we are lucky to have real mum Kelly Scott share her Breastfeeding Story with us.
01 October 2015 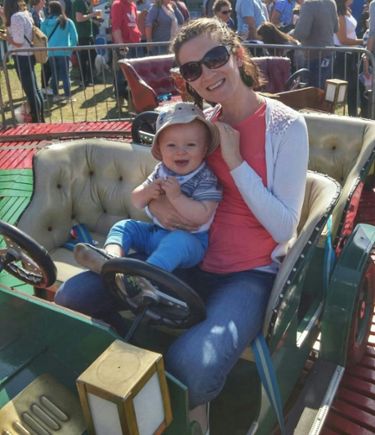 "I've always wanted to breastfeed and it was something I worried about not being able to do when I was pregnant. I was breastfed and never really considered an alternative. In my head, I’d cuddle my baby for ten minutes or so and then put him to bed where he'd sleep soundly - you've got to love the naivety!

Sebastian arrived into the world at high speed and latched on without a problem. The first feed was totally overwhelming but to me it felt completely natural. The Breastfeeding Support Worker reaffirmed what my pre-birth visit had shown me and I felt happy to take Seb home.

For the first few weeks Seb fed a lot, which seemed normal enough. Then he got a cold – I had to sleep sitting upright on the sofa holding him so he could breathe properly. The cold also threw any good feeding habits out of the window and it started to take longer and longer, which made getting out of the house really difficult. One day I went shopping with my mum, but the ‘shopping’ never actually happened because I spent the entire time feeding Seb and didn’t see much beyond the John Lewis café and Mothercare feeding room in the four hours we were out of the house!.

After a few weeks of this, I started attending a baby group and realised that this feeding pattern wasn't normal. Seb was still blocked up and was starting to scream at night when he was put down.

Three doctor's visits and several weeks later, Seb was diagnosed with reflux, which was causing him wind at night and bunging him up. Infant Gaviscon saved the day. I think without that diagnosis my resolve to breastfeed exclusively would have been sorely tested, as I was struggling to get out in the day, as well as being sleep deprived. Seb still fed slowly, but by about four months it had sped up and when (with HV support) we started to wean at nineteen weeks, things improved dramatically.

The other major help was introducing a bottle. It had always been the intention so that my husband could feed Seb too, but it helped functionally as I knew that twice a day he was receiving a good amount of milk and would be okay to sleep. We used the Medela Swing to express and this was both easy and very efficient. At first I could only get an ounce or two off, but it quickly increased up to eleven ounces a day.

Sebastian is now just over nine months old. He loves his food and I cherish the breastfeeding time with him as it is now so much shorter. His longest feed is now first thing in the morning and probably lasts fifteen minutes, but his other feeds are often only five minutes long.

Those early days when he fed continuously and interminably seem a long way away and I wish I’d known it would get easier because I might have enjoyed my cuddle time even more. I felt like I was doing it wrong, but I wasn't.

My intention is to breastfeed Seb until he is one, so that he can move straight onto cow’s milk. There have been times (usually in the middle of the night!) when I have wanted to give up, but I feel really proud of both Sebastian and myself that we have continued. The cafes around me have always been very supportive of breastfeeding (and now the messy procedure of feeding solid food), which has allowed me to get out and meet people/not go mad. The most important thing for me has been my very supportive family, especially my mum, who has answered questions and eased my mind whenever I was worrying about anything. I couldn’t have done this on my own and I’m privileged not to have had to."

A huge thank you to Kelly Scott for sharing her Breastfeeding Story with us. If you would like to share your experience of breastfeeding on our blog please email our PR team on emily@bumppr.co.uk for further details. Thank you.

Next: Weaning and Breastfeeding
x