The next in our series of real mums’ stories and accounts of breastfeeding, mum Rebecca shares her story of falling in love with breastfeeding, despite her initial doubts and why she wants to continue feeding her daughter mothers milk for as long as possible! 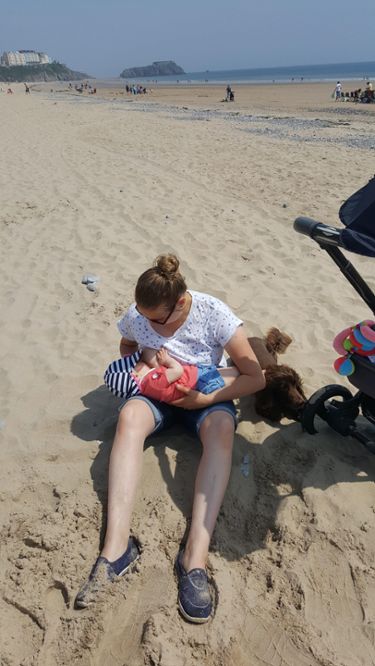 I was always apprehensive about breastfeeding a baby, the idea just did not come naturally to me. I had no problem with other women doing it, but I was so unsure about feeding my future children mother’s milk (or so I thought!).

I’m now mum to a beautiful 13 -month-old girl and am over halfway pregnant with number 2. When I was pregnant with my first, I always said I wanted to initially feed my baby colostrum as I knew how important that was. I thought we would maybe breastfeed for a month but then change over to formula. No questions about it, I had the bottles ready, the prep machine, everything. I was just convinced breastfeeding wasn’t for me. I think I even felt embarrassed at the thought of having to do it, especially in front of others.

We hit an unexpected complication during my labour in that my daughter was breech, so we ended up having a caesarean section. Despite this, I was set on being able to do that initial feed with my baby.

As soon as I was moved onto the ward after the delivery, I tried breastfeeding my new baby. Fortunately, she latched fine and seemed to be feeding well, but then the new mum anxiety set in. When your newborn baby is crying constantly and you’re new to breastfeeding, you start to doubt yourself. Is she getting enough food? Is she latching properly? She must be crying because she’s not eating? All of these thoughts crossed my mind and so I would try to combine breastfeeding and a little bit of formula, thinking at least she was getting something. My daughter actually refused formula altogether in the end.

A few days later, my body was still recovering from the birth, my boobs were so sore from breastfeeding and my nipples well… it felt like piranhas were attacking me when my daughter tried to feed. I was near breaking point one night at home and said to my husband, ‘I can’t do this anymore, I’m in so much pain I just can’t do it’.

But I persevered. Come morning, everything seemed brighter and I continued to feed, and then it just clicked! We had my daughter’s first weight check since birth, and she could have lost up to 330g, but she only lost 30g! Go boobies! I felt so proud that she had done so amazingly well and was flourishing, and it was down to me and my body.

She continued to gain weight so well and breastfeeding finally seemed to be becoming second nature to me now. I didn’t have to sterilise bottles, and pack bottles and bottle warmers to leave the house - I just had to take myself! In the night, there was no getting up in the cold to make bottles.

In public, I stuck to feeding rooms in the beginning, but as my confidence grew I did it wherever I was eating, using a cover-up. I’d also purchased a Medela Swing pump after being recommended it by a friend, which meant, if needed I could have a bit of help with feeding. I absolutely love my pump and it was definitely money well worth spending.

So here I am, 13 months on from my daughter’s birth and I am still breastfeeding! It is slowly being weaned down now as I would like a little break before number 2 arrives! I started out saying breastfeeding would never be something I did, but now I wouldn’t even consider bottle feeding! Once I knew the amazing powers of my breast milk, and how amazing it is for my baby’s health, I would never consider formula feeding again as a first choice.

Believe in yourself and your bodies ladies, it just goes to show, you can change your mind, without even meaning to!

Thank you to mum, Rebecca, for sharing her breastfeeding experience. If you would like to share your breastfeeding story please email, medelamums@gmail.com

Previous: The New Swing Maxi Flex | Why Should I Use a Double Breast Pump?
Next: September’s here! 20 Best Autumnal Names for Your Newborn!