Second time mum, Lisa, reflects on what she learnt from breastfeeding her first child and how she approached her new baby care with confidence, even with the challenges she faced along the way! 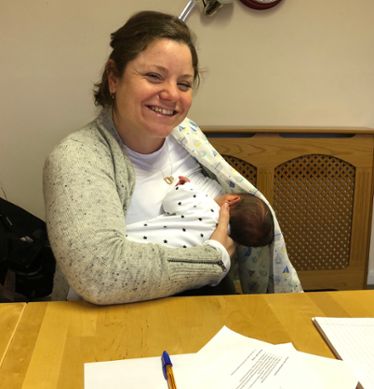 Will breastfeeding be easier second time round? This is a question I asked myself a lot but despite being sure I would have more confidence second time around, I was terrified by the memory of the early weeks. I wasn’t going to let it put me off and I held onto the fact that it gets easier. Within weeks it becomes second nature and the toe curling pain when the little monkey first latches on does ease!

I had a very different birth with my second son and sadly not at all the normal ‘easier’ second birth that everyone tells you about – this one ended up in some sort of horror show (I’ll spare you the details), but I did feel like I was an extra in Greys Anatomy, which I loved!

Gorgeous little Otto arrived on 2nd Jan at 16.21 and boy oh boy am I smitten!  After 48 hours of fun and games (AKA labour) I was beyond shattered but within seconds of Otto being born he was on my chest having skin to skin and once in recovery, about 20 minutes later, I was getting him latched on. 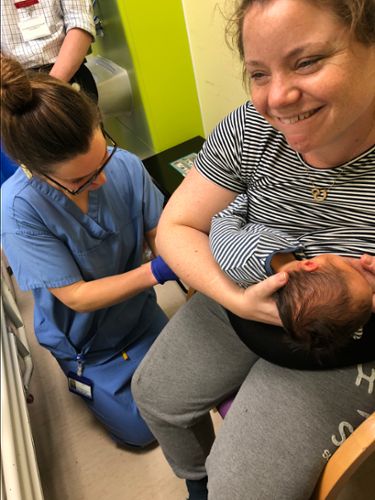 Now, this was the first very big difference from my experience breastfeeding my first son – when I had no idea what I was doing! Sadly, the midwives were too busy and me and my husband were manically googling ‘How to Breastfeed’ and ended up watching YouTube videos to help! It was all a bit fraught and I was so stressed – which we all know doesn’t help!

Second time I tackled breastfeeding right away – rather than gently, nervously showing Otto where to go, like I had Toby – I basically put my boob in his mouth. I also squeezed lots of colostrum rubbing it on his lips and getting the taste in his mouth. This worked a treat and within hours he was latching on.

Whether it was my knowledge and experience from feeding Toby, or Otto was always going to find it easier than his big brother, breastfeeding has gone really well for 6.5 months now, though it was not without its hurdles!

The first week of Otto’s life was spent in hospital while he was treated for jaundice. This was a really tough time as all I wanted was to be home with my new baby and my little boy who was definitely aware mummy was not around. It’s also not ideal to be figuring out your feeding while in a hospital ward, especially when you add the pressure from all the doctors telling you to give formula - it was a challenging few days. 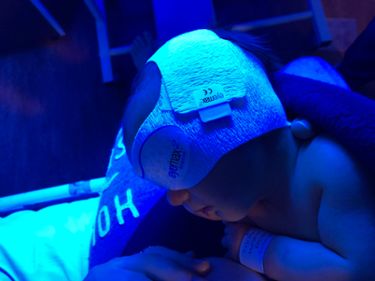 I was furious that doctors first port of call was formula and I had to be very stern telling them to go away –they were basically implying what I was doing for my baby wasn’t right. It was pretty demoralising but I just felt sure I was doing the right thing. Now I want to be clear, I would never ever have risked Otto being really poorly, but I was day 2… day 2! My milk had not even come in and they were telling me to give a bottle. I refused and insisted that they gave me a pump if I needed more milk. I got on the Symphony and pumped as much as I could.

I had confidence in my body and knew that I absolutely did not want to threaten breastfeeding Otto by supplementing at this early stage – but, the me three years previous when I had Toby might have caved under the pressure. Read up, get second, and third opinions and believe in your body! I did not give Otto formula, despite 3 doctors being very insistent and he was just fine.

You feel a little hopeless when your gorgeous baby is suffering and under the blue light – but during his time in hospital Otto was prodded every few hours and had many, many blood tests. I breastfed throughout as much of this as I could, and it definitely calmed him.

Another hurdle we had to jump was the fact Otto was diagnosed with Club foot. Otto was put in a cast at 2 weeks old and wore this (changed weekly) for 5 weeks. In a time when you are mastering a basic breastfeeding pose or maybe attempting the rugby position – throwing a cast into the mix took some getting used to! I tried many positions and we got there in the end. 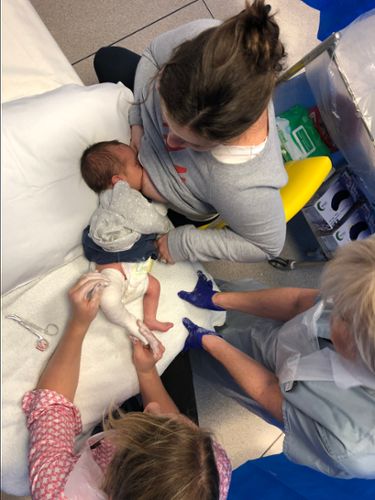 Otto then moved onto Boots and Bars, which is a device that fixes his feet in a position. He initially wore these 23 hours a day for 3 months – this felt like an eternity at the time, but I am so happy to say he now just sleeps in them and will for five years. These presented yet another challenge as his legs were in a fixed position. Figuring out how to feed to ensure he was comfy and could latch on well took a lot of practise and patience. Initially I could only really feed when sat on the sofa with cushions… but I learnt some tips and could eventually feed out and about again.

The treatment in parts has been uncomfortable for him and breastfeeding him throughout has been important to me, so, although it was more challenging than expected, it was worth every minute of what felt like acrobatic breastfeeding at times!!! I was also able to breastfeed during all the casting process which was just wonderful and really comforted Otto.

Otto now has teeth (and he bites!) and I am back to work full time, so I feel our journey may be coming to an end… sob! I will be so sad as I know it will be the last time I breastfeed and there is just nothing that compares to those snuggly breastfeeding moments. So, although my boobs will never return to their former glory (that was questionable anyway) I am so glad I persisted breastfeeding both of my sons, it is an achievement I am very proud of and will never forget. 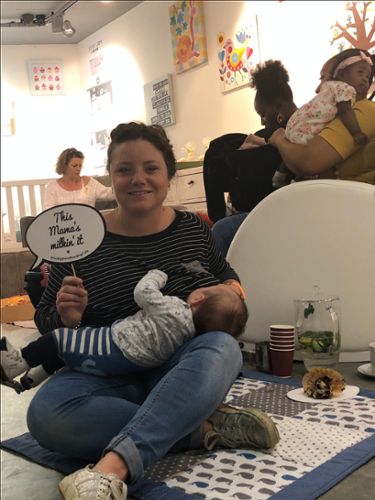 Thank you to mum, Lisa, for sharing her breastfeeding experience. If you would like to share your breastfeeding story please email, medelamums@gmail.com

Next: My Breastfeeding Story: How Pumping helped to Increase Milk Supply
Click here for a website in your region!