What are the benefits of breastfeeding for your baby?

Breast milk is the best food for your baby, and the many advantages of breastfeeding mean your baby benefits from your milk in lots of other important ways too 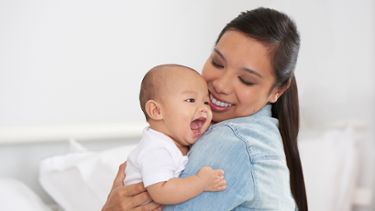 You may have heard that the World Health Organization (WHO) recommends breastfeeding for six months at the very least, but what’s the reasoning behind this? Well, breastfeeding is one of the most effective ways to ensure child health, and if it was scaled up to near-universal levels, about 820,000 children’s lives would be saved every year1 – a pretty compelling argument.

The health benefits of breastfeeding

As well as nourishing him, breast milk protects your baby. Breast milk is full of live ingredients, including stem cells, white blood cells and beneficial bacteria,2 as well as other bioactive components, such as antibodies, enzymes and hormones,3 which all help fight infection, prevent disease, and contribute to normal healthy development.

Babies who are breastfed exclusively for their first six months are less likely to suffer from diarrhoea and sickness, gastroenteritis, colds and flu, ear and chest infections and thrush.4 And compared to formula-fed infants, exclusively breastfed babies are half as likely to be victims of sudden infant death syndrome (SIDS or cot death).5

Of course, breastfed babies do get poorly sometimes but breastfeeding when your baby is sick has even more benefits: “If a baby gets an illness, or his mother does, the protective components in her milk tend to increase,”6 explains Professor Peter Hartmann of the University of Western Australia, an internationally renowned expert on lactation and breastfeeding. “A breastfed baby is likely to recover faster than a formula-fed baby because the mother’s body will produce specific antibodies against whatever infection he’s picked up.”

And it’s not only about nutrition and immunity – breastfeeding when your baby is sick or upset comforts and soothes him, which is not to be underestimated as an important benefit. In fact, studies have shown that breastfeeding reduces crying and provides relief when babies are having vaccinations.7

“Feeding your premature baby breast milk is the most beneficial thing you can do for him,” Professor Hartmann points out. “Every drop counts.” In fact, healthcare professionals view breast milk not just as nutrition, but as a medical intervention. Read more on how important breast milk is for premature babies.

How breastfeeding benefits your baby’s sleep

You might have heard that formula-fed babies sleep longer, but it seems that’s a myth. Research shows breastfed and formula-fed babies are just as likely to wake for milk during the night.10 But the difference is breastfed babies get back to sleep sooner. The oxytocin produced in your baby’s body when he breastfeeds makes him feel sleepy afterwards. And other hormones and nucleotides in your milk help your baby develop healthy circadian rhythms (sleep-wake patterns).11

Your baby’s first six months are a busy time for his rapidly growing brain – its mass almost doubles during this crucial period.12 A US study showed that toddlers and preschoolers who’d been exclusively breastfed for at least three months had brains with 20 to 30% more white matter – which connects different regions of the brain and transmits signals between them – than those who’d had no breast milk.13

The importance of breastfeeding for baby brain development is reflected in research across the globe. In a UK study,14 16-year-olds who’d been breastfed for six months or more as babies were more likely to get higher grades in their school exams. And Brazilian researchers found people who’d been breastfed for at least a year tended to earn more money by the time they were 30.15

Even when results are adjusted to take factors such as household income and mother’s education into account, it seems infants who are breastfed exclusively are more likely to have higher IQs than formula-fed babies.16 “There are a few ideas about why this is,” says Professor Hartmann. “One relates to the long-chain fatty acids that are present in breast milk, such as DHA, which has a positive effect on the brain and brain development.”17

And the latest research suggests breastfeeding has behavioural benefits too. In a study of 10,000 children, those who were breastfed for more than four months were 30% less likely to show problem behaviour at the age of five.18

The lifelong benefits of breastfeeding for your baby

Breastfeeding doesn’t just benefit your baby for the first six months. The longer he continues to have breast milk, the more advantages there are – especially for his health.

Every nursing session raises the level of oxytocin – the ‘love hormone’ – in both your bodies, encouraging bonding.19 This can form a firm foundation for future relationships, and may even help your little one cope with stress in later life.20

Research also shows children who were breastfed as babies are less likely to suffer from cancers such as leukaemia and lymphoma,21 and tend to have better eyesight,22 and straighter teeth23 than those who had formula milk. Breastfeeding also helps to lower your baby’s risk of becoming obese or developing type 1 or type 2 diabetes24,25 as an adult.

So if you’re wondering when do the benefits of breastfeeding end, the answer is they last a lifetime. And the longer you continue to breastfeed, the more health benefits there are for you too.

Breastfeeding and bonding with your newborn

What to expect when bringing your baby home

What to eat while breastfeeding

The convenient way to store, carry and warm expressed breast milk, Medela breast milk storage bags are easy to use and hygienic. ...