18 April 2015
At Medela's 10th Breastfeeding and Lactation Symposium in Warsaw, which took place over this weekend (17-18 April 2015) over 450 delegates from 48 countries were reminded of the immeasurable value that breast milk provides for both preterm and term born infants. There was resounding consensus on the need to ensure that all preterm babies have access to human milk from a medical, nutritional and growth perspective.
Share this content 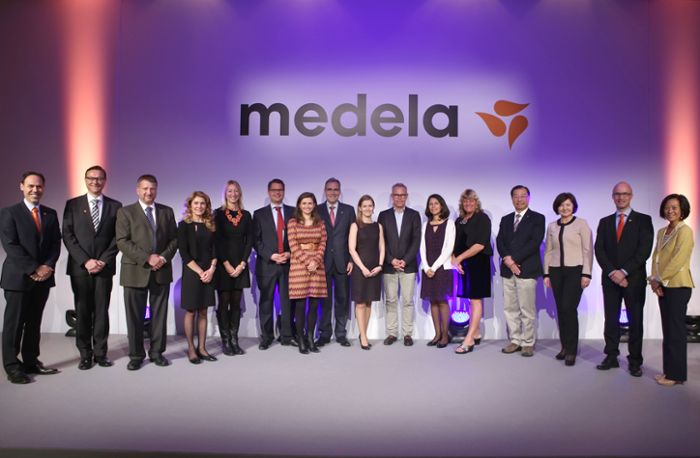 A decade of hosting symposia have resulted in a structure that encourages speakers and attendees give and take the best from newly available research, and its application to day to day practice. The first series of presentations - The unique components of human milk - provided fascinating insight into the complexity of human milk. Associate Prof Donna Geddes and her colleagues at the University of Western Australia have been working to understand appetite control regulation and the effect that it has on the growth and body composition of the breastfed infant. The results will support clinicians and promoting practices that are beneficial for the infant. There is strong evidence to suggest that a baby’s early environment, including as a foetus in the womb, has a programming effect which can influence its health in later years.

Anna Cannon, PhD candidate, has devoted a large part of her research to appetite control. With obesity figures on the increase, the role of breastfeeding in helping to abate this trend should not be ignored. While formula-fed infants often empty the bottle, breastfed infants only drink to their appetite due to control hormones such as leptin. Research into leptin and other appetite regulating hormones is still in its infancy. Hopefully this dimension of research will help reduce the 42m children under the age of 5 who are already obese. (WHO, 2015).

The discovery of stem cells in breast milk continues to attract a lot of attention. Dr Foteini Hassiotou is at the forefront of this research investigating their properties and potential. Experiments in mice show that maternal milk stem cells can be found in the liver, pancreas, kidneys, spleen, thymus, and most recently in the brain. Looking at the pathology of the breast, Foteini also quoted studies that breastfeeding results in a reduction of 32% for certain breast cancers. Research shows that - over the period of breastfeeding - the number of certain stem cells in the breast is reduced. She hypothesized that the reduction in breast cancer could have a relation to the reduction of these stem cells in the breast. She also shed light on new research results that show that breast milk contains huge amounts of "microRNA", molecules that control gene functionality. Further research will have to clarify the relevance of this new insight and the role of these new molecules vis-à-vis the baby.

A second series of presentations under the title “Latest recommendations for research based practice” focused on translating research into practice, and closing the knowing-doing gap. Integrating milk supply as an essential part of the NICU process in Poland is one of Prof Maria Wilińska's priorities. Twelve guidelines have been published that include hospital staff training plans, rules for the handling of expressed milk, and the reasonable use of formula milk in hospitals. This initiative to promote exclusive breastfeeding was started three years ago. A milk bank was introduced in parallel, and combined, both initiatives have resulted in a reduction in the consumption of antibiotics by 63% and the use of formula by 65%. NEC figures have also decreased significantly.

Prof Cindy Lee Dennis is convinced that initiatives to foster Exclusive Breastfeeding (EBF) could have a significant impact on the large number of children who perish every day as a result of malnutrition. Social, cultural and health system failures continue to stand in the way of EBF, but action at health system, community and policy levels has the potential to change the status quo. Peer groups (mother-to-mother) and social marketing campaigns can have a lot of impact in the communities, positively influencing behavior, and encouraging EBF.

The ability of parents to care for their baby as soon as it is born is one of the key drivers for the future outcome of that child. Prof Matthias Keller underlined the importance of family integrated care in the NICU and presented his NeoPAss programme which involves parents as active members of the team in the hospital. NICUs face numerous challenges including variations in clinical practice, lack of coordination and inconsistent interfaces and communications. His programme helps NICU staff partner with parents by integrating explicit parent coaching, checklists and documentation. The results are encouraging with reduced length of stay and an increase in breastfeeding rates at discharge.

The final group of presentations looked at the Value of human milk in NICU, sharing insights from the practice perspective. Prof Christoph Fusch presented his ongoing research into individualised and targeted fortification which if done properly can ensure that a preterm’s full nutritional needs are met. Breast milk is not a standardized product and therefore cannot be treated as such. The technique that he is studying incorporates regular analysis of breast milk composition, taking all three major nutrient groups into consideration (carbohydrates, proteins, fats) rather than simply protein. Reliable analysis equipment is to be further refined, as well as the best fortification composition.

Prof Dianne Spatz described the Breastfeeding Resource Nurse Programme that equips nurses with expert evidence based lactation support that can be used at the bedside on a day-to-day basis. Her “Ten steps programme” for promoting and protecting breastfeeding for vulnerable infants helps inform and educate parents in the NICU about the importance of human milk, and its role in medical intervention. Both programmes result in significant increases in breastfeeding at discharge in the US, and the 'Ten steps program' is being implemented in NICUs worldwide.

Taking on board learnings from Japan where formula is forbidden in the NICU, hospitals in Canada are working on policies to encourage the exclusive use of breast milk. Prof Shoo Lee shared the impact of this move which has already seen a dramatic reduction of NEC from 6 to 2.5% in Canadian NICUs. The introduction of integrated family care with delegation of care of newborns to parents in hospitals (with nurses acting as coaches) has also generated positive results, with weight gain improvement and better parent/staff satisfaction. Treating the family as a single care unit is a concept that could, and should be extended to parents of non-NICU-babies.

Founded in 1961 by Olle Larsson and headquartered in Switzerland, Medela today is led by his son Michael Larsson. Medela concentrates on two business units: "Breastfeeding", which is leading in the development and production of breastfeeding products, and "Healthcare", which engineers and manufactures highly innovative medical vacuum technology solutions. Medela conducts basic research in partnership with leading scientists, medical professionals and universities, and uses the research results in the development of its products. Medela has 18 subsidiaries in Europe, North America and Asia, and together with independent partners distributes its products in more than 90 countries. The company employs over 1,500 staff worldwide, 330 of whom are located in the Canton of Zug, Switzerland.